In the second installment of our Up-Close series, Kye Petersen talks to Anna Segal about growing up in the Sea to Sky, climate change in his backyard and rumours of a starting a new company.  Photos credits to Athan Merrick and Jia Condon. 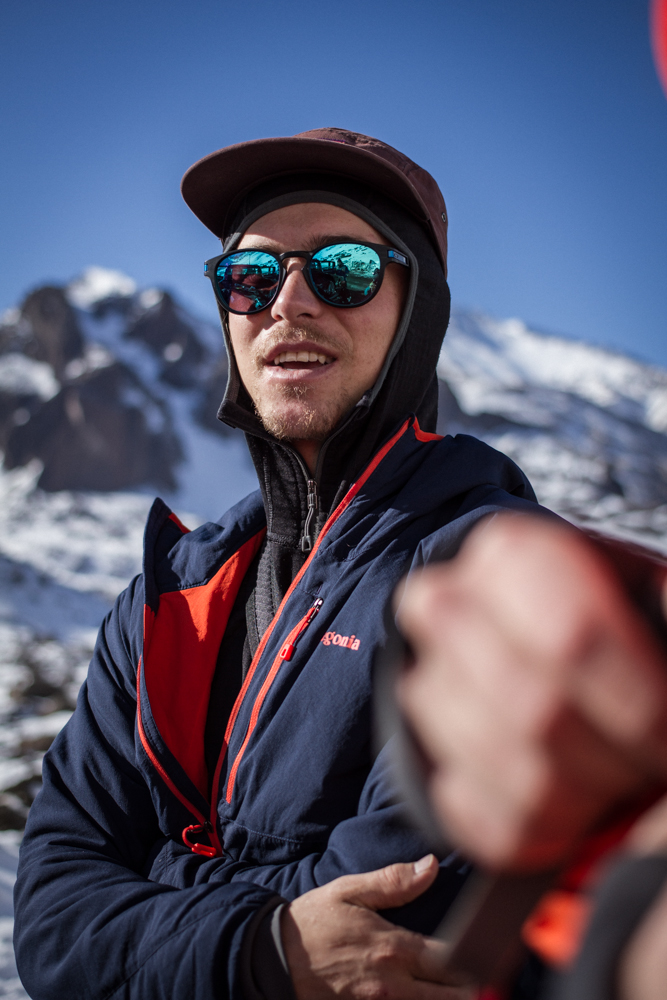 What’s your goal in being involved in Protect Our Winters Canada? My goal is to simply raise awareness of the world climate change crisis and in particular, our local British Columbian and Canadian large scale environmental issues that need to be fought in order to see change.

You were born and raised in the Sea to Sky and had more exposure to the mountains in this area than most locals twice your age. What are the biggest changes you’ve noticed in the mountains? That’s a hard question in the sense that there are so many changes it’s hard to say which is the biggest. The simplest and broadest answer is the disappearance of glacial ice and Névé snow.

We used to see large amounts of snow falling at a consistent rate throughout winter that would stack up. We now have large fluctuations in temps, cold and warm. Extended below seasonal temps with extreme winds from the north now continue for abnormally long periods and come more often. Additionally, we see even more extreme warm temps that arrive earlier than normal in spring. These high-pressure systems allow the mountains to melt and fall apart, allowing the snowpack to melt faster than normal.

All this tends to make our snowpack more dangerous and less consistent. By spring we used to see the snow go into an isotherm pattern (below freezing air temps at night and daytime sun that heats the surface above freezing). This allowed that snow from the winter to turn to fern snow over spring and summer, eventually morphing to glacial ice. However, more recently we’ve seen above freezing temps through spring and summer nights, which in turn allow the glaciers to recede faster than ever before.

One of the other larger changes that we’re seeing is that at low elevations in the valleys, where we always had snow as kids, now rarely retains snow that lasts throughout our ski season. With all these changes we basically see our spring and fall seasons disappear and we just have a winter season with sporadic swings of hot and cold temps that abruptly turns into summer. Then by mid summer the glaciers, peaks and forests are so dry that they cannot recover.

Summers are dryer to the point that we have fires in West Coast rainforests that have never ever burned before five years ago, and Falls that have extreme floods and ice storms we also never used to see. All in all ‘extreme weather’ is the phrase to use for these changes.

Last year we had a winter that many would describe as epic. Yet, this was followed by a summer of

heat waves and devastating forest fires in the area. Do these weather patterns seem normal to you? No. Three years ago was the first time in my 29 years on this planet that we saw smoke from forest fires around the Coast. Every summer since then we’ve had almost a month that’s been so smoky you cannot even go for a bike ride. But as far as last winter season goes, I wouldn’t say it was epic...we had a big start and some large sporadic storms, but no consistency. We used to see one or maybe two arctic outflows, lasting for 3-4 days, that create cold, windy weather and facet the snow. But last year we had at least four arctic outflows and they stuck around for up to two weeks at a time. This made it really hard for the snow to bond to the steeps in the alpine. On top of that, our snowpack was below normal. The last couple years, regardless of the big dumps we have had, or snowpack depth, the snow melted early due to the first few high pressure systems in the spring. The last few good seasons I can remember, that reminded me of back in the day, were the winters of 2009/2010 and 2011/2012- those seasons were epic.

We used to ski powder snow on North faces right through April, May and even to June 1st, but more recently our big meltdowns are coming early in April when the first big high pressure cycle is now hitting. I think the biggest misconception with climate change is that it’s all warm; that’s wrong because it’s all extreme. For instance, we had one of the rainiest Septembers in history around my home, but we also had the driest August ever. As a young kid it would rain consistently throughout summer in Whistler, but not as much in a short period. And for winter as a kid we used to get a few long high pressures that would stay sunny and cold with a south wind, whereas now I can count on one had the sunny days we now get cold powder snow. It's just extreme wet to extreme dry; extreme dumps to extreme droughts.

Have you made any lifestyle changes over the past 5 years that have been motivated by environmental sustainability? Yes, in many of the ways I live day to day. Mainly what I consume as food, how I travel and the materials I buy. For instance, I think more about where stuff is coming from and what is really necessary to own, or use, or abuse. Also, there are many things I've grown up doing, that some people that haven’t grow up in the mountains might not think about, like simply not over consuming, day to day reusing, recycling, rebuilding and leaving no trace while in the wilderness, etc. We all have a footprint and knowing what it is will help us each to decrease it. I'm constantly learning, evolving and supporting what is at the forefront of sustainability and renewable resources. None of us are perfect and there are many things in our lives that are bad for the environment. Some of these things we can easily change, some we can conspire to change going forward and then there are some that we just cannot get around. But, I think knowing what we can all change as individuals and just being conscious of that is what’s going to change the world, assuming the world does follow. The list goes on but consciousness of everything used and consumed, and what goes into it, is key.

Word on the street is you’re starting a new company. Has sustainability played a part in the manufacturing and materials you’re choosing to use? Yes very much so. It is still not public as to what kind of company I’m starting, but our motto is to ‘build the best product, implement new designs, shapes and materials in an effort to lessen our impact on the planet and improve the quality of ride on snow’. So first is to build the best product we can and then figure out how to do it with the least impact. We are a small group and a small company that aim to keep everything local.

When you choose to associate yourself with different brands as an ambassador or sponsored athlete, do your environmental ethics weigh in at all?  Yes for sure, big time. Now more than ever because I can sort of afford to. But, at the same time I have to make a living. I don’t have any family money, formal education or other career to fall back on.  So at times I've had to take  cheques from brands that I don’t necessarily agree with in terms of how certain parts of their business is run. I’m trying to take this into my own hands so I have more control of it. That’s why I've been working with companies like Patagonia, whom I believe in strongly. Also, starting my own brands and film project are giving me more creative control, along with the control of our environmental footprint.